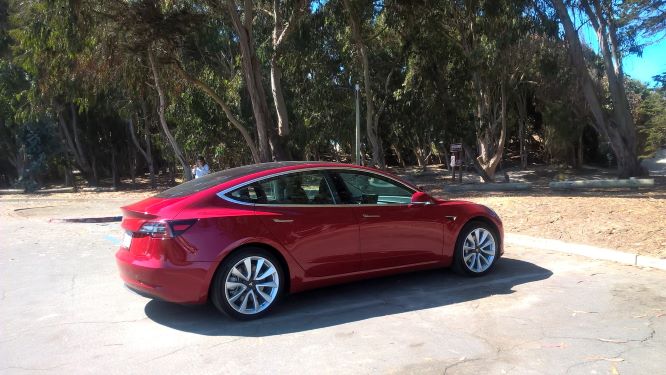 The German plugin vehicle market scored over 56,000 registrations last month, a 36% improvement year over year (YoY), an amazing performance, especially considering the overall market was down 26%. As a result, last month’s plugin share ended at 29% (17% BEV).

The yearly plugin vehicle market share was up to 24% (12% BEV), an impressive result, especially if we look back to a year ago when we were celebrating the fact that the YTD market share had reached 10%. … Remember when that was a thing? At the time, I wrote: “so this market has officially reached double digits, also known as … The Disruption Zone. Expect the status quo to be changed forever, and the S-curve to be surfed like Garret McNamara in Nazare.”

But the big news this month was the fact that the Tesla Model 3 hit a record 6,828 registrations! And that awesome result allowed it to not only win the best seller title in the plugin category, but to almost beat the eternal VW Golf in the overall ranking!

As a matter of fact, the Texan ended just 58 units below the consistent leader of the German market, with the 8th generation of the VW Golf barely holding onto the #1 spot. The 6,828 registrations of the midsize Tesla was also the 2nd best performance ever by an EV in Germany, only behind the 7,000-plus score of the VW ID.3 last December (and how many of those were pre-registrations?).

The VW ID.3 was the runner-up among electric vehicles, with a rather disappointing 2,694 registrations, but that was still enough to reach #11 in the overall market. The VW ID.4 Skoda Enyaq closed out the podium, thanks to 2,027 registrations, another record score from the Czech EV. That was nearly double the sales of its German cousin, the Volkswagen ID.4 (#11, with 1,079 registrations), which raises the question: Why hasn’t Volkswagen launched the Enyaq outside of Europe yet? Imagine how well the Enyaq would sell in China, for example….

Off the podium, the best selling PHEV was the Mercedes GLC300e/de, only in 8th, which means there were 7 BEVs in the top positions, illustrating the recent BEV push. Last month, BEVs represented 60% of plugin sales, against their YTD average of 50%. These changing winds even allowed veterans like the #14 BMW i3 to recover some pace, with the quirky hatchback scoring 969 units last month, its best performance in 6 months. In fact, the i3 was BMW’s best seller in September, which can be seen as a glass half-full/half-empty question: On one hand, it shows the 8 year old model is still able to run with the best in its category (and I think the little BMW will become a future classic), while on the other hand … it isn’t very flattering for the rest of the (extensive) BMW lineup that the oldest of them is still the best seller. The upcoming i4 will probably change that, but until then, it is visible that the BMW team lacks a star player.

In the second half of the table, the highlight is the Tesla Model Y going up to #12, with 1,073 registrations, while another recent addition scored a record performance as well, with the Hyundai Ioniq 5 scoring 1,010 deliveries. Expect the retro XL hatchback to continue climbing the table, possibly joining the top 10 in the next couple of months.

Outside this top 20, three models deserve a mention. The tried and tested Kia Niro EV scored a record 700 units, missing a top 20 spot by just 31 units. The Porsche Taycan sports-EV-that-thinks-it’s-a-sports-car also had a record score, with 570 registrations, no doubt helped by the new Cross Turismo body, and the Audi Q4 e-tron continued its production ramp up, reaching 598 registrations last month.

Regarding the 2021 table, all hell broke loose in the front, with the Tesla Model 3 surpassing not one but two Volkswagens in one month. That allowed the midsizer to reach the leadership position on the back of the aforementioned 6,828 unit record score, a performance that surprised many.

Now, we went from a point where Volkswagen was preparing to hand the leadership title from the little e-Up to the ID.3, to a table-turning situation where both Volkswagens have a 2,000 unit disadvantage against the Model 3, which is now the favorite to win the 2021 Best Seller title.

Having said that, the race between these 3 models, but especially between the Model 3 and ID.3, will be fierce until the end, although now it’s at a point where Volkswagen needs to throw all the aces in the table, in order to recover the leadership and win the company’s first Best Selling Model title, something that has been evading the brand, its best score so far have been a 2nd spot in 2018 and 2020, with the VW e-Golf, so bring on the popcorn, because the last 3 laps of the race will be exciting!

This poor showing from the Golf PHEV is jeopardising its leadership position in the PHEV category, as both the #7 Ford Kuga PHEV and #9 Mercedes GLC300e/de still have chances to take the trophy from the Golf PHEV. This new generation of the Golf PHEV (VIII) has simply failed to live up to expectations.Elsewhere, more bad news for Volkswagen — the Golf PHEV dropped two spots, to #6, to the benefit of the Renault Zoe, which jumped to #4. So, this also means there was a 100% BEV top 5. Meanwhile, the #10 VW Passat PHEV lost one spot to the Mercedes GLC300e/de twins.

But while the Volkswagen brand had a horrible month in September, the daughter companies of the German conglomerate were on the rise in the second half of the table. The popular Skoda Enyaq jumped 4 positions, to #15, and is now only 600 units below the #11 Volkswagen ID.4. The SEAT Leon PHEV climbed to #12, while the sporty Cupra Formentor PHEV joined the table in #20. Volkswagen Group now has representatives from 5 brands in the top 20.

While there was a lot to talk about in the model ranking, the same can’t be said for the brand ranking. Volkswagen (17%) is clearly leading its home market, followed by Mercedes (11%) and BMW (9%, down 1 percentage point). However, #4 Audi (8%) is closing in on the Munich automaker and attempting to get on the podium.

In the race for “Best Selling Foreigner,” Tesla (5%, up 1 point) joined Skoda, Hyundai, and Renault, each with 5% share, with the US automaker currently running ahead of the pack.

Looking at the rankings by OEM, the standings remained the same, with Volkswagen Group having its domestic market well in hand. It has an impressive 36% share, followed at a distance by Daimler (14%) and BMW Group (10%, down 1 point).