Being an environmentally friendly mode of transport, railways make an important contribution to environmentally friendly mobility. Most trains in Europe’s railway network use electric traction. Thanks to the use of modern vehicles with three-phase AC drive systems, the railway is the only mode of transport capable of recovering large amounts of the energy used during operation and feeding it back into the grid. Rail transport is currently by far the most electrified transport mode in Europe. Especially in urban areas, rail almost exclusively runs on electricity already today.

Regarding main lines, 60% of the European rail network is already electrified and 80% of traffic is running on these lines. There are no technical obstacles to further electrification, but the cost for upgrading and electrifying the existing rail infrastructure and the expected carbon reduction need to be considered on a case-by-case basis. On busy lines electrification makes most sense economically and from a carbon savings perspective. On low-density lines there is today no proven cost-efficient solution to replace diesel-powered trains. Further electrification of railways could be explored considering its economic viability.

On non-electrified railways in Europe, diesel is the used fuel. As alternatives for diesel locomotives there are several options being developed and/or in demonstration projects. The EAFO 3.0 portal present, alternative fuel solutions which are already in use (for test periods or not) or which are being developed.

ABB has won orders from Swiss train manufacturer Stadler to supply leading-edge equipment for more than 160 trains and locomotives in Europe and North America. ABB battery and traction systems will further drive decarbonization and support the transition to more sustainable electromobility. For the Wales & Borders railway franchise in the United Kingdom the order includes customized ABB traction equipment for 71 rail units. The traction equipment converts electrical energy from the overhead power line, generator or battery into the correct voltage and frequency for driving the traction motors. Out of these trains, 24 will be equipped with advanced technology to enable tri-mode operation, which powers the train via catenary lines, diesel generator or batteries.

Known as the Independently Powered Electric Multiple-Unit (IPEMU), the train’s integrated battery system was charged from regenerative braking when running on electrified lines and at terminal stations. A pantograph was used on overhead lines. 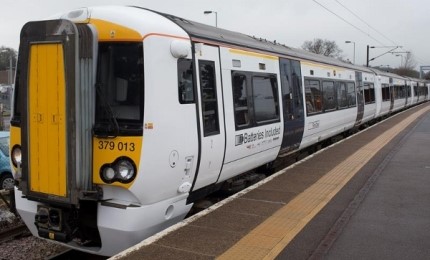 Schleswig-Holstein’s local transport association, NAH.SH, has awarded Stadler a contract for the supply of 55 battery-operated FLIRT trains. After presenting the battery-operated drive technology to the public for the first time at the InnoTrans 2018, Stadler has managed to place it in a very large transport contract within a very short time. The vehicles are due to begin operation on the north and east networks, until now operated with diesel vehicles, starting at the end of 2022. Unlike diesel trains, the new battery-operated FLIRT is significantly quieter, more energy efficient and accelerates better. Under optimal conditions, a range of 150 kilometres was calculated, while the longest route without overhead catenary in the Eastern and Western networks is approximately 80 kilometres. They are charged via the existing overhead catenary, especially in Kiel, Neumünster, Flensburg, Lübeck and Lüneburg railway stations and on the Osterrönfeld–Jübek line. In addition, additional recharging equipment is to be created in selected places and existing overhead contact lines extended, to enable ideal recharging of the vehicle’s batteries during operation. 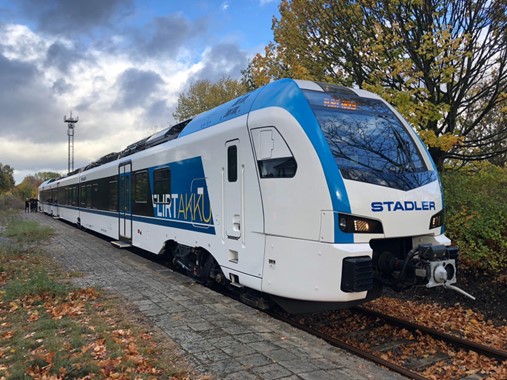 The two-carriage vehicles of the battery-operated FLIRT Akku type provide space for 198 passengers, of which 124 are seated. Two spacious and accessible multi-purpose areas are provided for wheelchairs, pushchairs and bicycles. The air-conditioning vehicles also have a wheelchair-accessible toilet. All trains are equipped with Wi-Fi, power sockets as well as video surveillance of the passenger areas and a modern passenger information system and ensure contemporary ride comfort.

In February 2020, Alstom announced its first contract for battery-electric regional trains in Germany for the Leipzig-Chemnitz route, which requires the train to cover 80 km (50 miles) of non-electrified track. The maximum configuration is for 120 km (75 miles). The company will deliver 11 Coradia Continental™ BEMU trains starting from 2023, which will be ready for the job, driving on its own power or using catenary to recharge. The deal, including maintenance until 2032, is worth approximately €100 million ($109 million).

In January 2022, Alstom’s first fully approved battery train was tested in passenger service by Deutsche Bahn (DB) in cooperation with Baden-Württemberg and Bavaria.

Battery locomotives, charging under the wires for when they are off the grid, is an answer, but they require quite considerable additional power for charging. In 2017, soaring costs for electrification of the Great Western main line, the Midland main line and in the north led previous transport secretary Chris Grayling to curtail plans and focus on introducing “new bi-mode train technology”. These trains are equipped with pantographs for electrified railways and diesel engines for non-electrified sections of the network. "This means that we no longer need to electrify every line to achieve the same significant improvements to journeys,” said Grayling in July 2017. A swell of orders has followed, most recently from East Midlands Railway for 33 bi-mode trains from Hitachi. Going one step further, Great Western Railway ordered 19 ‘tri-mode’ trains from Porterbrook in 2018. These trains are surplus Class 769 stock which have been converted to operate using overhead wires, third rail or diesel engines. 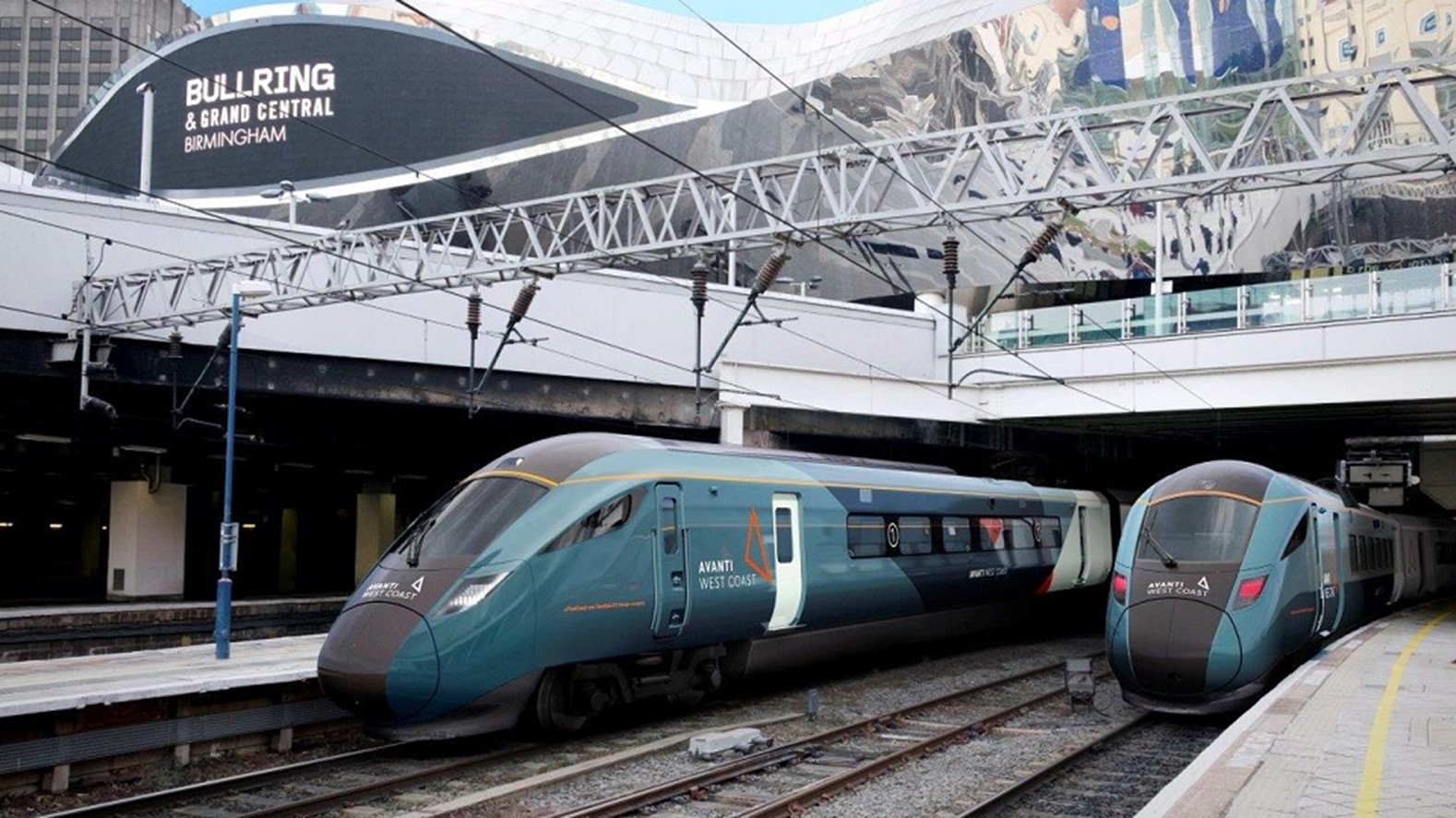 Hydrogen could be considered an interesting alternative for passenger and freight rail in isolated areas and islands or other parts of the network that are difficult to electrify. In this respect, the possible technological developments emerging from EU joint activities on research and synergies between them (e.g., Shift2Rail and FCH JUs) should be considered.

It was at InnoTrans 2016 in Berlin that Alstom presented the Coradia iLint for the first time. The launch of the CO2-emission-free regional train that represents a true alternative to diesel power positioned us as the first railway manufacturers in the world to develop a passenger train based on hydrogen technology. And just two years later, at 2018, the iLint entered into commercial service in Germany.

After 530 days and more than 180,000 driven kilometres, the successful trial operation of the world's first two hydrogen trains was officially completed at the end of February. Two pre-series trains of Alstom's Coradia iLint model have been in passenger service since September 2018.

Introduced by Alstom in 2016, the Coradia iLint™ is the world’s first and only operational passenger hydrogen train. It has successfully operated in regular passenger service in Germany and Austria and covered more than 220,000 kilometers. In addition, it has been successfully shown in the Netherlands, Sweden, France, Poland, Czech Republic and Slovakia. Since the prosperous launch of the hydrogen fuel cell trains, increasingly more railway operators have expressed interest in this emission-free alternative. First serial production of 14 Coradia iLint, started in passenger service in August 2022 in Lower Saxony. Additionally, Alstom will supply 27 hydrogen trains by the end of 2022 for operations in the Rhine-Main region. 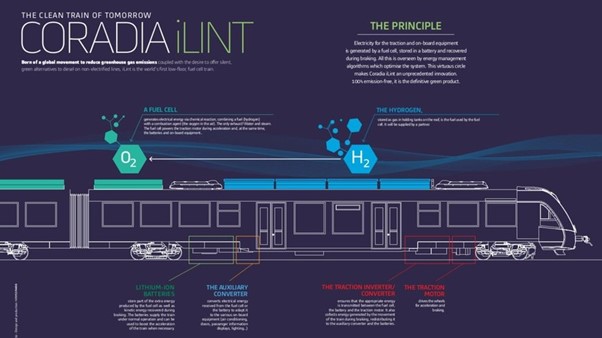 Biodiesel as drop-in or replacement for diesel

Biodiesel can be used with a limited percentage as a drop-in fuel in existing diesel locomotives or as 100% fuel. There are many pathways available to produce biodiesel, some of which are considered as advanced biofuels.

The Dutch are all aboard with cleaner biodiesel trains (2020). The provinces of Groningen and Fryslân has seen the completion of a trial using cleaner biodiesel trains. Following this two-year trial with Arriva, the new rolling stock will use this cleaner fuel. The switch from ordinary diesel to Hydrotreated Vegetable Oil biodiesel (HVO) reduces CO2 emissions by 89%. The rail fleet will be expanded with new trains called WINKs. The contract was signed on November 9 2017 at a climate conference held in the city of Groningen by the provinces of Drenthe, Groningen and Friesland. These WINKs will run from next spring and will include batteries to store energy that is released during braking in addition to running on the cleaner diesel. 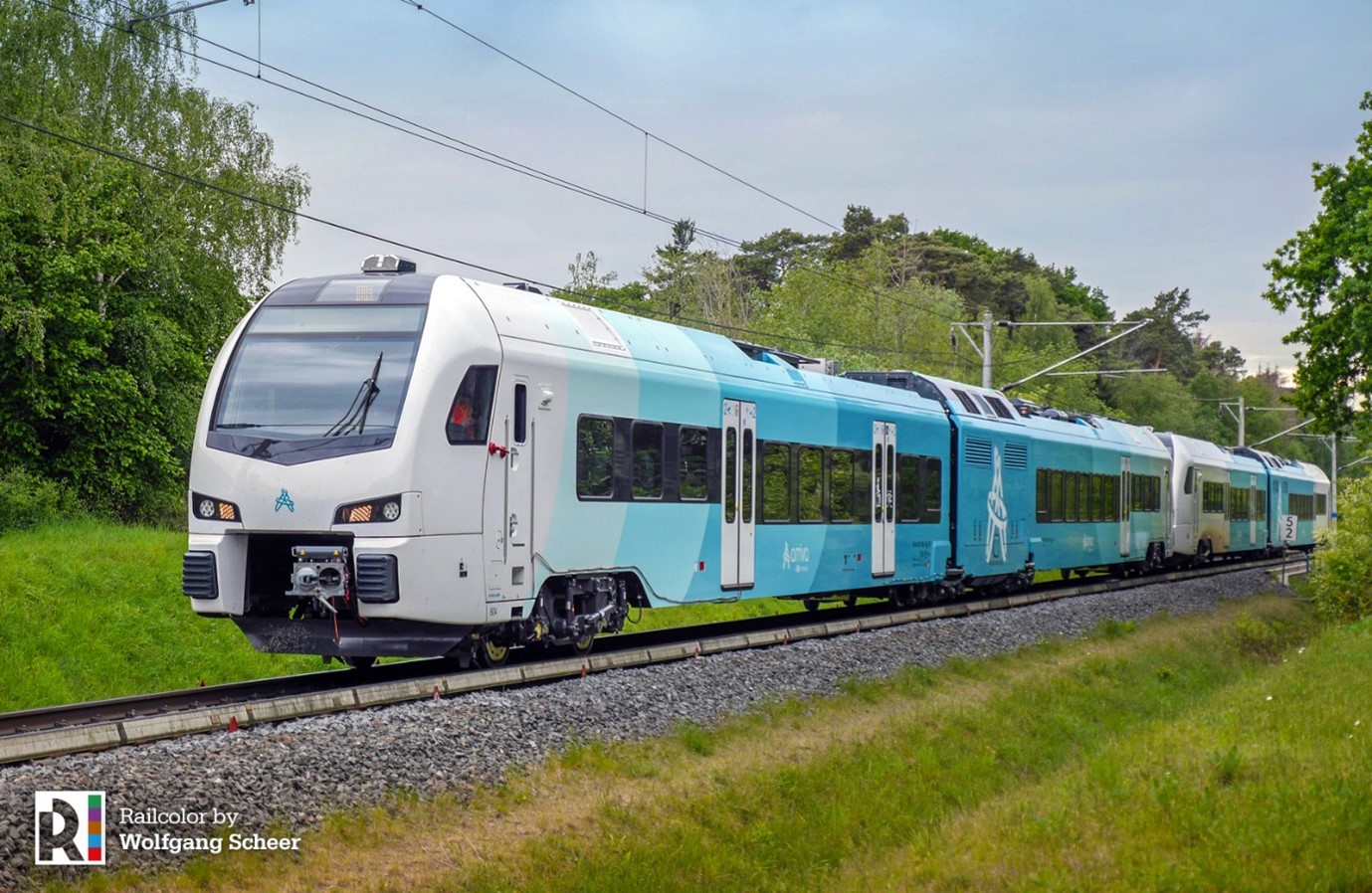 In the UK, Chancellor of the Exchequer Gordon Brown launched the country’s first ‘biodiesel’ train in 2007. Virgin Trains’ Class 220 Voyager used a blended fuel that consisted of 20 per cent biodiesel – derived from sources such as rapeseed, soyabean and palm oil – to reduce CO2 emissions. RSSB researchers concluded that a 20 per cent blend of biofuel mixed with 80 per cent diesel was the highest blend that could be universally accepted without significant expenditure to alter train engines. 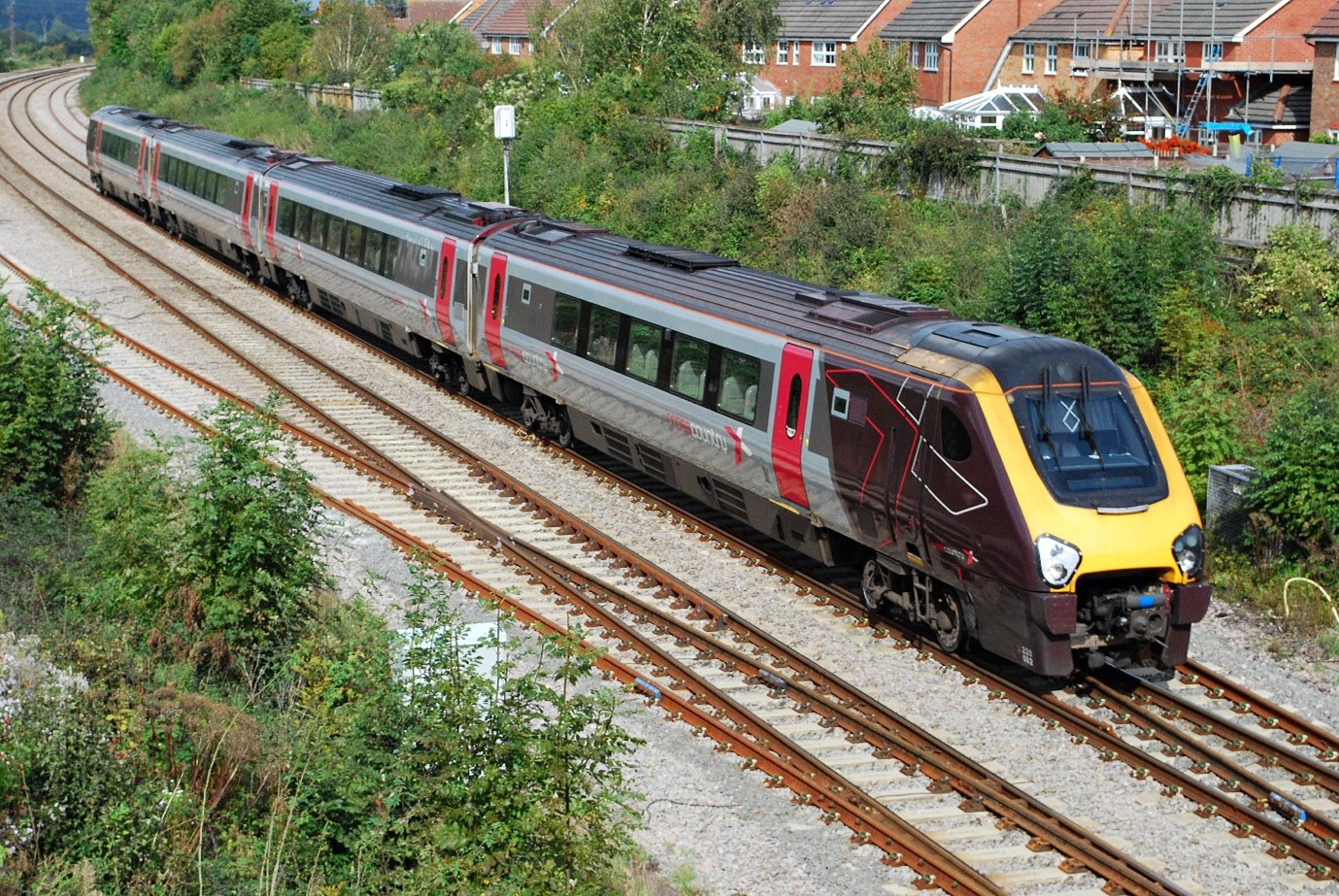 Latvian engineering company DiGas will equip a diesel locomotive of Estonian rail freight carrier Operail with a gas turbine. The vehicle will be upgraded by Spring 2020. After that, it will be tested on the Estonian railway network. In late 2020, the LNG-powered locomotive is expected to be introduced into regular service. The joint project of Operail and DiGas costs a quarter million euros and includes the retrofitting of GE C36-7 diesel locomotive produced by General Electric. To implement the project, DiGas will divide the 17,000-litre fuel tank of the locomotive into two parts. One section will be used for diesel fuel, while another one will be adapted for Liquid Natural Gas (LNG). With the help of an LNG-powered locomotive, Operail intends to reduce the operational costs and emissions. The vehicle of this type usually consumes 30 per cent less fuel, emits 20 per cent less carbon dioxide and 70 per cent less sulphur dioxide. 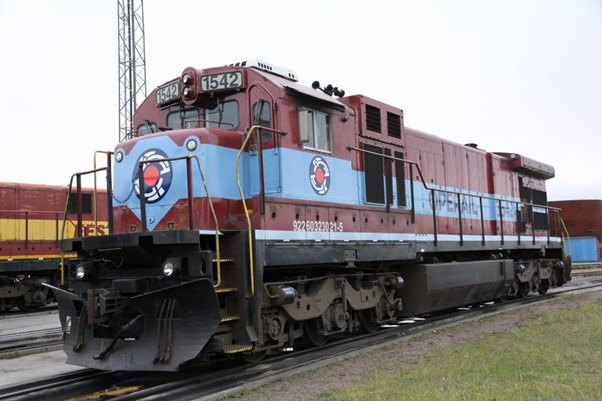 LNG has been tested as a locomotive fuel for 25 years in North America and is still under evaluation by several Class 1 railways including BNSF. The fuel has been adopted by FECR as an alternative to diesel for two reasons. Firstly, FECR’s line-haul locomotive fleet is captive, operating solely on the Jacksonville – Miami main line. Secondly, FECR has access to a ready source of LNG through Florida East Coast Industries’ LNG plant at Titusville.